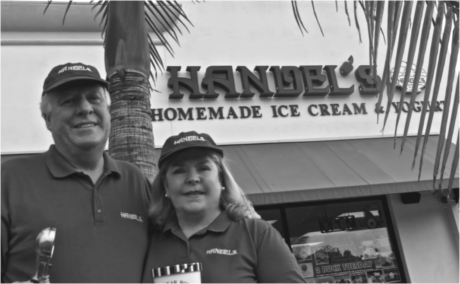 I scream, you scream, we all scream for …. Handel’s. Handel’s Homemade Ice Cream, that is. Ever since the store opened in Redondo Beach, the response has been, well, “scooper duper.” Though Handel’s first opened its doors in an Ohio gas station nearly 75 years ago, the South Bay didn’t get its own Handel’s until Paul Danylik and his wife, Susan “Q” Danylik, opened a franchise at the corner of Pacific Coast Highway and Prospect in 2010.

It is one of only five Handel’s stores currently in California. Today, Handel’s is well known by Riviera locals as the place to go for smooth and creamy ice cream, made fresh daily one batch at a time. With flavors like Graham Central Station (the current best seller), Meri’s Joy (created by an employee), Vanilla Caramel Truffle and Banana Cream Pie, there are enough flavors to please every palate. “Our ice cream is freshly made so it really tastes exceptional ,” said Q.

“Alice Handel opened her first store in her husband’s gas station in 1945 with just two flavors, and now we have more than 100 flavors of ice cream.” Paul and Q Danylik employ local teens to help run their store, and give back to the community with fundraisers for neighboring schools. “Our employees are wonderful,” says Q.

“I feel like even though our own children have flown the nest, we’ve added 22 more kids to our family.” Their loyal following includes regulars who stop by weekly for their favorite scoop. One customer, who has been at death’s door several times, has made it her bucket list to try every single Handel’s flavor.

She purchases four flavors a week and is happily licking her way through the more than 100 Handel’s varieties. Enter this month’s raffle to win a $25 Handel’s gift certificate. And be sure to stop by on “2 ½ Buck Tuesday” for a tasty treat at only $2.50. Handel’s is located at 1882 Pacific Coast Highway in Redondo Beach, and is open daily from 11am – 10pm. 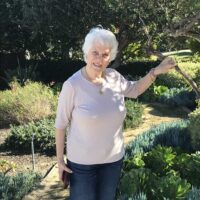 Igor, Lisa and I are sending you this long overdue note to say thanks for all your help and efforts in selling our home this past summer. They say that buying or selling...
Mike Betlinski and Lisa Allen
Igor, I'm looking forward to seeing you this final trip, looking you in the eye and shaking your hand while thanking you for your superior guidance and professionalism thro...
Bill Babcock
Igor, My wife and I want to thank you for your hard work and professionalism in managing our real estate transactions. The entire experience went smoother than one could ima...
Mark & Heidi Duncan