Reaching for the Stars: An Interview with the Riviera’s NASA Man, Jim Montgomery 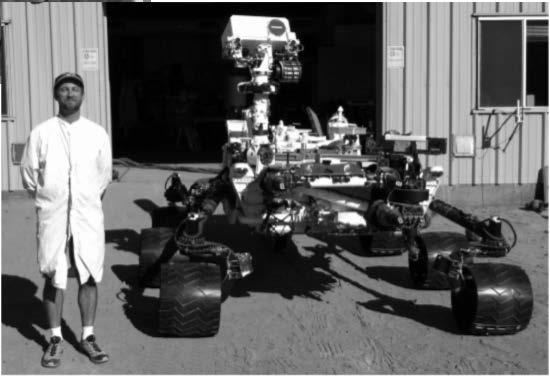 Of the more than 7 billion people on this earth, Hollywood Riviera resident Jim Montgomery is one of the fortunate few who gets to explore the wider universe, and get paid for it! A senior engineer at the Jet Propulsion Laboratory (JPL) in Pasadena, Jim was a member of the team that delivered the 2,000 pound Curiosity Rover to Mars in 2012, and is now working on robotic missions to Mars and Europa, a moon orbiting Jupiter . Here are excerpts from an interview with Jim we think you’ll find fascinating.

What got you interested in the field of robotics/engineering? I’ve always been interested in math, science and learning in general. I grew up in Michigan, and received a B.S. in Computer Science from the University of Michigan. This opened the door to a job with Hughes Aircraft Company here in El Segundo. While at Hughes, I worked on numerous programs that involved real-time embedded computer systems that marry software with hardware. I enjoyed that work and decided to pursue graduate studies in Computer Science at the University of Southern California. While there, I joined a team of students building an autonomous flying robot using a radio-controlled model helicopter as a platform. It was my introduction to the field of autonomous robotics and I enjoyed it. I received my doctorate in 1999 in Computer Science and Autonomous Robotics and that led to my current job at JPL in 2000. 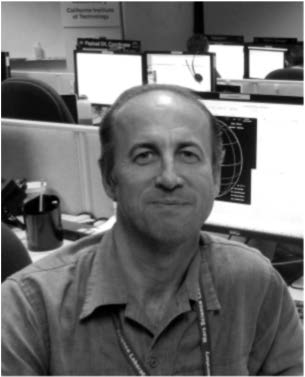 Yes. I was born in 1964 and was a child during the Apollo moon missions. I was 5 years old when Neil Armstrong and Buzz Aldrin landed on the moon. I immediately wanted to be an astronaut! I applied six times but was never chosen. I was disappointed but looking back, the desire to be an astronaut was a main motivating factor for me getting my doctorate, which is how I ended up with my dream job at JPL. When I speak at public events I always try to tell the audience to follow your passion, because even if you don’t succeed you will probably end up creating opportunities for yourself. That certainly happened for me at JPL. I owe my place at JPL in large part to being inspired as a 5 year old kid by Neil, Buzz and the rest of the Apollo moon astronauts. That is part of the reason why I enjoy speaking to groups about the wonders of space exploration. I hope to pay it forward by inspiring others to pursue their dreams.

What is the best part of your job?

There are so many things I love about my job. I get to explore the Universe for a living! I get to interact with phenomenally talented and diverse people from JPL and around the world working in common purpose to extend our knowledge of the Universe and our place in it. I get to take part in outreach events, interacting with students and the public in a variety of venues, helping to share my love of space exploration and the pursuit of knowledge with others. I am humbled and grateful for the opportunity.

What was your role in developing Curiosity?

I was fortunate to be able to have two roles on the Mars Science Laboratory/Curiosity mission. In my first role, I was the field test lead for the Terminal Descent Sensor. It’s a radar we designed and built at JPL to enable us to land Curiosity on Mars. No radar existed that could meet our requirements so we had to design and build our own. Prior to using the radar on Mars, we had to make sure it would perform as expected. We do a great deal of simulation, analysis and real-world testing to ensure that the systems we build here on Earth will perform as required for our various missions. I led the team that field tested the radar here on Earth using a helicopter and an F-18 jet to simulate the flight dynamics of the radar over “Mars-like” terrain, that is terrain with little to no vegetation with features like those we see on Mars. Death Valley and the Mojave Desert are two of our favorite tests sites for this kind of activity. My second role was on our surface engineering operations team. We are a team of engineers responsible for safely operating Curiosity on the surface of Mars. I was part of the team that received data from Curiosity each day and used that data to determine rover health and status. Other members of our engineering team would take that data and use it to plan future operations on Mars with the science team. They would uplink the new commands to Curiosity and she would send back the results down the next day and the cycle would be repeated.

How is the Curiosity Rover doing today?

Overall, very well. Curiosity landed on Mars on Aug 5, 2012 and since that time has achieved her primary mission. The question before Curiosity landed on Mars was “Was Mars ever habitable for life as we know it?” The answer is a resounding yes. We now know due to Curiosity that microbial life (single-celled organisms) could have existed on Mars a billion years ago, when Mars was a warmer, wetter planet. We’re not saying life ever did or does live on Mars, only that the conditions for life existed. It is very inspiring to be able to work on something where we rewrite the science text books, expanding human knowledge to areas where we previously did not know the answers!

What robotic missions to space are you currently working on?

I’m working on the Mars 2020 mission (https://mars.nasa.gov/mars2020/), our next rover mission to Mars. It is based heavily on the MSL/Curiosity mission in terms of hardware and software. The science payload has changed as the focus for this mission is to find the bio-signatures of life. Basically, we are trying to find evidence of past or present life on Mars. It is really hard though because single-celled organism do not tend to leave fossil records like more complex life forms do and that is really the level of complexity we think could have evolved on Mars a billion years ago based upon the state of life on Earth at that time. I’m working on the system that will allow us to land in locations on Mars that were too dangerous for past missions. The scientists really want to go to these places because they think that if life did or does exist on Mars, these places have higher likelihood. They tend to be more rugged terrain like cliff faces and former river deltas.

Do you think humans will ever visit Mars (or any other planets besides the moon), and if so, when? Yes, I think we could perform an orbital mission to Mars where we don’t land but circle the planet in the 2020’s. I think landing humans are Mars is entirely feasible within years of accomplishing that goal.

Do you have any advice for current students who hope to one day go into a field like yours?

In general, follow your passion, dream big and focus on your goals. I wanted to be an astronaut and studied math, science, and engineering. That was my passion when I was a youth. I never became an astronaut but in following my passion and working hard it opened the door to my current job at JPL. Specifically, if you want to work in space exploration, I would say make sure to get a degree in a science, math or engineering field and when you are in college make sure to do internships with one or more companies in this field, be it JPL, another NASA field center, or a commercial company like SpaceX. You will get valuable work experience, you will be exposed to things that may cause you to redirect your coursework and you are more likely to be hired straight out of college with that company since you are a known quantity to them.

How long have you lived in the Hollywood Riviera and why did you pick this area to live in?

My wife, April, and I bought a house in the Hollywood Riviera in 2008 because it has more of a neighborhood feel with most homes being single family. It has less of a crowded city feel, more verdant and quieter. And I can even see a few stars at night! Coming from Michigan where I could see the Milky Way Galaxy in the night sky, getting to see some night sky reminds me a little of home. We also like that we can walk down to the Riviera Village from our house.

What do you enjoy doing during your free time?

Hiking, gardening, spending time with friends and family, sitting in the back yard watching the natural world around us, sharing my knowledge of sustainable living (plug-in electric cars, solar PV systems, rain water capture, etc.) with others, volunteering my time for causes that speak to me and doing my small part to help make the world a more happy, peaceful and compassionate place.

Feel free to contact Jim at monty@jpl.nasa.gov if you have any questions.

Riviera Elementary is so thankful to once again receive your generous donation. Riviera appreciates the help we get from our community in helping our students do their best. ...
Christie Forshey
Igor, Lisa and I are sending you this long overdue note to say thanks for all your help and efforts in selling our home this past summer. They say that buying or selling...
Mike Betlinski and Lisa Allen
I have searched for the exact words that I could use to describe just how much Stephanie and I have come to appreciate you, more than a real estate agent. They are too numerou...
Steve Hamlet