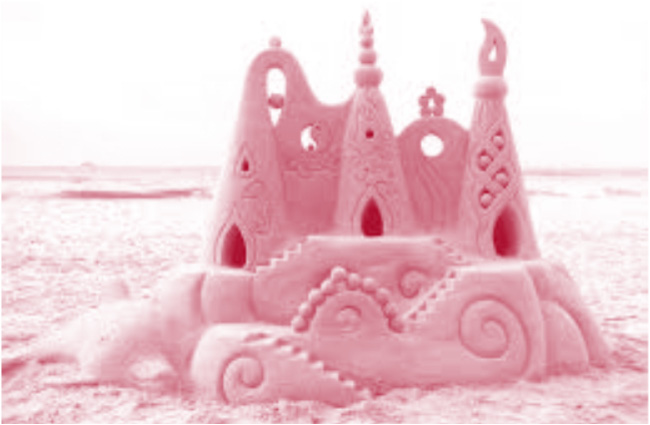 Todd Vander Pluym was born to play in the sand. The creator of Sand Sculptors International, Todd recalls how his parents would put his crib on the beach when he was just a few months old, only to find him reaching between the bars to grab fistfuls of sand. Seventy-fiveplus years later, Todd has made a career out of turning sand into works of art. As one of the world’s premier sand sculptors, Todd and his team have crafted more than 1,600 sculptures around the world, including a 37-foot-tall Sleeping Beauty’s Castle on the beach in Japan and custom work for Walt Disney Corporation, Universal Studios, Sea World, Starbucks and many more companies.

He has won multiple awards for his work, including four world championships. You might have even seen him and his sculptures in People Magazine, on Good Morning America, and in many other media outlets. “I’ve always been interested in sand sculptures because they leave visual enjoyment without hurting the environment,” says Todd.

“Unlike most dwellings, sandcastles have solar heating, ample running water, are biodegradable and come in as is condition.” Prior to becoming a full-time sand sculpture in 1980, Todd earned a degree in fine arts and went to work as an architect. But making art from sand has always been his passion.

Todd has created sculptures on every continent except Antarctica and has organized several world record events. His works have graced not only beaches, but also shopping malls, theme parks, conventions and more. He recently was hired to build a sand sculpture in front of Wall Street. “I like to build anything,” said Todd. “From houses of cards to matchstick towers, I enjoy putting things together. But rolling up my sleeves in sand is my true nirvana.” Todd and his wife have lived in the Riviera since 1977 in a home that, not surprisingly, features a castle in the front yard and shrubbery shaped like dragons.

You can learn more about Todd and view photos of his amazing work at www.sandsculptors.com

Previous ArticleAre You Paying Too Much for a House in Your Neighborhood?Next ArticleFour Questions to Ask Your Partner Before Buying a Home Together

Dear Igor, I just wanted to send you a thank you note for the great house that you found for me in Torrance. Your work was exceptional; you were very helpful, respons...
Matt Beheshti
Igor, Lisa and I are sending you this long overdue note to say thanks for all your help and efforts in selling our home this past summer. They say that buying or selling...
Mike Betlinski and Lisa Allen
Igor, My wife and I want to thank you for your hard work and professionalism in managing our real estate transactions. The entire experience went smoother than one could ima...
Mark & Heidi Duncan