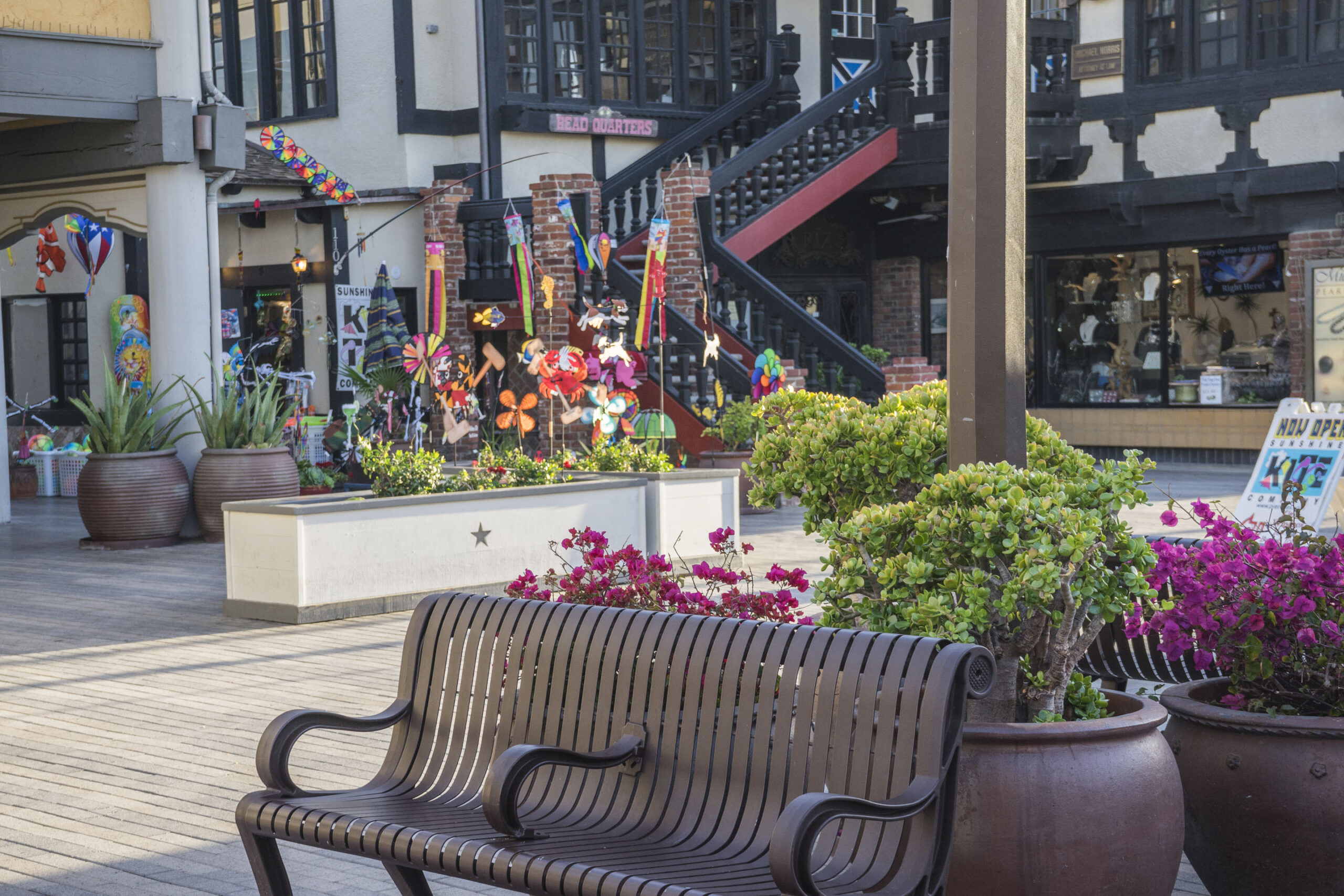 Wracking your brain about what to get your significant other for Valentine’s Day this year? In an effort to help, we culled through some of our previous blog write-ups and also hit the Internet to find some suggestions and came up with these 10 fun gift and date options in Redondo Beach—just in time for the most romantic day of the year.

You’re sure to the ideal present for your sweetie at Riviera Village, a charming, pedestrian-friendly destination that’s overflowing with one-of-a-kind boutiques offering a unique collection of clothing and gifts. Expect to find something for every taste, including an eclectic mix of Native American jewelry and artifacts at the Moon Dancer Gallery; an over-the-top collection of crystals at Sacred Stone Gallery: pre-owned watches from Cartier, Rolex, Omega and other brands at Finley’s Jewelers; surf-inspired art at The Aloha Bungalow; products handcrafted by artisans in developing countries at the nonprofit retailer Ten Thousand Villages; and much more.

Another popular shopping option is South Bay Galleria, a three-level destination at 1815 Hawthorne Blvd., just off the 405 Freeway, that boasts more than 140 retailers. Among them: Macy’s, Abercrombie & Fitch, H&M, Hot Topic, and Victoria’s Secret, just to name a few. And while you’re at South Bay Galleria, you also might want to check out Artesia Boulevard. This pedestrian-friendly business corridor begins on the west end at Aviation Boulevard and ends at the east end with the South Bay Galleria at Hawthorne Boulevard, and features multiple shopping choices.

With more than 50 oceanfront dining, shopping and entertainment opportunities, The Redondo Beach Pier is a great place to take in some panoramic and coastline ocean views while on a leisurely stroll, enjoy a variety of water activities, and pick up unusual gifts. Some of the spots you should be sure to visit at the pier—which is situated at 100 Fisherman’s Wharf, at the end of Torrance Boulevard, west of Pacific Coast Highway—include the Kobe Pearl & Gem Co., where customers can hand-select an oyster containing a cultured pearl, or if you’re lucky, a rare black pearl, that can be hand-set in yellow or white gold, or sliver.

While at the Pier, be sure to check out the Redondo Beach Marina. Found adjacent to the Pier, the Marina offers a variety of ocean-oriented activities including romantic gondola cruises, and once night falls, it’s the ideal place for spectacular sunsets and delicious dinners.

as a wide variety of locally owned and high-end national restaurants, Redondo Beach has unique dining covered—whether it’s for a quick breakfast or a fun night out on the town. Highly popular are the waterfront restaurants, which family-owned and operated Tony’s on the Pier, with a duo of bars, seafood specialties and a second-floor “crow’s nest-lookout” room offering eye-catching views from Palos Verdes to Malibu and Catalina Island and Mai Tais served in souvenir glasses, along with Kincaid’s Fish, Chop & Steak House, which in addition to elevated seafood and steak selections, features a buzzing happy hour daily in the bar area.

One of the area’s top attributes is the sunset. Best of all…it’s totally free. A favorite spot to view breathtaking sunset scenes over the water can be experienced via the floor-to-ceiling windows and private balconies at BALEENkitchen at The Portofino Hotel & Marina. The 63-acre Veterans Park, at 309 Esplanade, also offers some pretty stellar sunset views. Why not include a picnic? Just stop by a local restaurant or grocery store and pick up some tasty tidbits.

Make a plan to treat your loved to a day of fun at one of the area’s top upcoming events, including the 46th annual Festival of the Kite. Set for Sunday, March 8, from noon to 5 p.m. at the Redondo Beach Pier (100 Fisherman’s Wharf), this is one of the longest-running kite festivals in the country and includes live music, the Craig’s Hot Dog on a Stick Eating Contest, local dance and martial arts demonstrations. Taking over Seaside Lagoon (137 N. Harbor Drive) and the surrounding areas Friday-Sunday, May 1-3, is the Beachlife Festival. Expect this year’s lineup to feature Ben Harper & The Innocent Criminals, Lukas Nelson and Promises of the Real, G. Love & Special Sauce, and Jim Lindberg from Pennywise performing a solo acoustic set. A total of more than 40 bands will be performing on the Beachlife stages, along with a variety of food and retail vendors of all types of tastes, as well as a large selection of beer, wine, and cocktails.

6. Take to the beach

You might not know this, but the city’s beaches and waves are so spectacular that they were featured in the original cult-surf film Point Break. Its seashore, meanwhile, is the original home of surfing in the U.S., and Redondo Beach’s landscape gave birth to scuba diving and the global diving equipment and swimwear brand BlodyGlove. It’s also renowned for its seasonal whale watching excursions, sailing tours, top paddleboarding, and surfing spots.

Some popular beaches here include Redondo County Beach, which extends 1.5 miles south from the pier and connects with Torrance City Beach. It not only attracts those seeking to partake in sunbathing, boogie boarding, and some of the best surfing around for both beginners and experts alike, but also all of the nearby waterfront attractions. There’s the aforementioned Redondo Beach Pier, open 24 hours a day with a variety of shops, restaurants, and bars, as well as the International Boardwalk, which leads from the northern terminus of the pier around Redondo Beach Marina and offers shops and venues. King Harbor is subdivided into four marinas: King Harbor Marina, Port Royal Marina, Portofino Hotel & Marina, and Redondo Beach Marina (where you can take a romantic gondola cruise through the harbor).

Situated between Avenue A and Miramar Park, South Redondo Beach is a popular spot not only for volleyball but surfing, biking, skating, walking, running, swimming, windsurfing and beach walking as well. At the rear of the beach is the paved Marvin Braude Bike Path, which starts at Torrance and continues all the way to Santa Monica. Torrance Beach is a southern continuation of Redondo Beach that extends 1.5 miles before reaching Malaga Cove at the base of the Palos Verdes Peninsula — and it’s simply a nice place to spend the day surfing, sunbathing, playing in the waves and strolling along the shore — while Miramar Park, next to the Torrance Beach parking lots, offers a scenic view of the ocean, paths and grass.

Some of the most popular parks in the area include Charles H. Wilson Park, a recreational area known as the home of California’s first universally-accessible treehouse in a public space—The Annenberg Tree House, an impressive 2,500-square-foot wooden structure that allows children and adults of all ages and physical abilities to be their most adventurous selves. Hopkins Wilderness Park is an 11-acre park at 1102 Camino Real rife with an abundance of nature. Think a garden featuring drought-tolerant plants to educate the community about native plants and California friendly demonstration gardens, along with numerous hiking trails offering several different views of the surrounding areas.

“Rocketship Park,” is found on 6.3 acres in Torrance at 5101 Calle de Ricardo, adjacent to Riviera Elementary School. Among the park’s amenities is the four-level metal rocket, complete with a slide. Possibly the best feature of this park? The panoramic view of the L.A. basin, spanning as far as the Santa Monica Bay to the Getty Center, the Hollywood sign and Griffith Park Observatory. Open daily from 6 a.m.-10 p.m. Miramar Park is set on 1.6 acres at 201 Paseo de la Playa and Calle Miramar in South Torrance, and it’s rightfully named “sea view” due to its lovely locale overlooking Torrance Beach, along with many benches offering a view of the beach and ocean. The park also boasts a statue of a dolphin, which makes for a great Instagram moment.

At the 6.3-acre Veterans Park, you’ll not only come across some of the city’s most jaw-dropping ocean views, you’ll also find the Veterans Park Community Center as well. This 11,400-square-foot historic building (formerly Redondo Beach Main Library) was constructed in 1930 and is listed on the National Register of Historic Places, and contains an office, grand ballroom/banquet room, mezzanine, meeting rooms, fully equipped catering kitchen, bridal room and more.

8. Relax at a resort

The area’s resorts are a sure bet when it comes to special events, and Valentine’s Day is no exception. Embrace dazzling coastal vistas combined with personalized service and delectable cuisine at The Portofino Hotel & Marina, to create a spectacular setting for an intimate affair. At the Crowne Plaza Redondo Beach and Marina Hotel, lovers will enjoy a poolside terrace with jaw-dropping views of the ocean and King Harbor Marina, while The Shade Hotel Redondo Beach offers a setting right on the marina and with sweeping views of the coast and The Redondo Beach Hotel features a beautiful locale adjacent to the King Harbor Marina and just a few blocks from the Hermosa Beach Strand.

Spend time with your at a cooking class at the South Bay School of Cooking at 1951 Artesia Blvd. Purchase a gift card that will allow you to spend time with someone taking a class together, or sign up for the Romantic French Valentine course on Feb. 14 at 6:30 p.m. On the menu is a romantic French cooking class with a delicate Flamishe appetizer of savory leek and goat cheese tarts, accompanied by a salad of baby greens with fresh strawberries and balsamic reduction dressing, puff pastry-wrapped supreme of chicken with a dollop of apricot preserve and fontina cheese and roasted winter vegetables. And, of course: No romantic menu is complete without something chocolate, which in this case includes chocolate soufflés drizzled with a raspberry coulis. Topping it all off is a “French Kiss” cocktail of champagne with a blush of cassis.

Redondo Beach is definitely not lacking when it comes to the cultural arts. One of the favorite destinations is the modern, 1,450-seat Redondo Beach Performing Arts Center — the undisputed “cultural center” for the South Bay and beyond — which offers critically acclaimed musical and dramatic theatrical productions, along with performances from legendary musical artists. It’s also home to the world-class Los Angeles Ballet.

This October I sold my home in the Hollywood Rivera after living there with my husband and children for almost 50 years. Needless to say it was difficult to leave such a beaut...
Genny Burchfield
Riviera Elementary is so thankful to once again receive your generous donation. Riviera appreciates the help we get from our community in helping our students do their best. ...
Christie Forshey
It is our great pleasure to recommend Igor Nastaskin as a real estate agent. After meeting with several realtors, we decided to go with a local, knowledgeable, realistic, tru...
Paul and Alice Goldberg